COVID-19 Update: How We Are Serving and Protecting Our Clients.

When Your Next Decision MattersContact Us for a Free Consultation

We at Serafini, Michalowski, Derkacz & Associates, P.C. are sad to learn of the loss of a Detroit original, Bob Allison.  Bob, passed away, recently, at the age of eighty-seven (87), following a fall at home.  Our condolences go out to his wife Maggie and their three (3) sons.

His long and storied career as a journalist, broadcaster and TV personality began on the radio in 1962 with “Ask Your Neighbor“.  The show continued to air, in one way or another, most recently on WNZK 690 AM, for well over fifty (50) years.  Bob, also enjoyed some local fame as the host of “Bowling for Dollars”which aired locally on “channel 4” before it became WDIV.   He worked throughout the metro-Detroit area and touched many listeners and viewers with his friendly voice and honest answers.

Our firm is proud to have been a regular contributor on the Ask Your Neighbor show during the legal hour, in the past, as a guest contributing host.  As a guest host, we got to know Bob and his son Rob extremely well and truly feel like we lost a great neighbor.

END_OF_DOCUMENT_TOKEN_TO_BE_REPLACED

In compliance with the governor’s order regarding shelter in place and stay safe at home policies, the firm has implemented the following policies consistent with Executive Order 2020-21.

Pursuant to Section 4 paragraph (b) the firm has identified its essential employees necessary to conduct minimal business transactions, like banking, payroll processing, employee benefits and ensuring that those of us that are working from home have the ability to work remotely.   Each designated employee has a “transit letter” within his or her possession.

For compliance with the executive order the following information is available:

END_OF_DOCUMENT_TOKEN_TO_BE_REPLACED

The SECURE Act (Setting Every Community Up for Retirement Act) passed into law effective January 1, 2020.   Although it is uncertain how the act was named, it is certain that this act will significantly impact estate, tax and income planning for baby boomers and their children.   This act will force Americans with IRAs and other “qualified assets” to recognize more income, upon inheritance.

For years, the IRS allowed beneficiaries of an individual retirement account (IRA) to defer their receipt of income over their individual lifetimes through the use of the stretch distribution provision.   This is no longer possible as the act changes the way in which a beneficiary can elect to receive his or her own share of a decedent’s account: either as a lump sum distribution or as a ten (10) year plan of distribution.   The inherited “stretch” IRA is no longer an option after January 1, 2020.  As a result, the government will begin to receive more taxes from inherited income beginning 2020 moving forward.

The act does provide some relief as it puts off the age for required minimum distributions (RMDs) until the age of 72, if you have yet to begin receiving your RMDs prior to 2020.   It also repeals the maximum age of which a person can contribute to his or her IRA; allows for expansion of 529 plans; and, provides credits to small businesses that setup automatic enrollment into their retirement plans.

This is a wonderful organization and our firm is proud and privileged to be a sponsor and a part of helping achieve its mission. 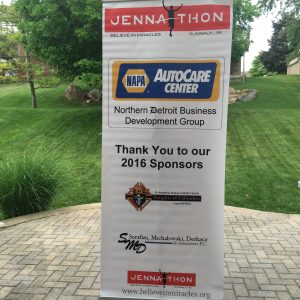 Learn more about this great organization by visiting their website at www.believeinmiracles.org

END_OF_DOCUMENT_TOKEN_TO_BE_REPLACED

Partner, Patrick Derkacz, recently settled an auto injury claim for $1,195,000.00 for a husband and wife who were the victims of a violent car accident.

The couple was traveling to see their granddaughter’s new apartment on a Sunday morning before their lives were changed forever. They were violently rear-ended by a vehicle driving 70 mph. As a direct result of the accident, both the husband and wife sustained serious and life changing injuries.

Mr. Derkacz was able to prove that the driver of the accident was negligent and that, due to their injuries, the quality of the couple’s lives had been significantly diminished.

END_OF_DOCUMENT_TOKEN_TO_BE_REPLACED
Metro Detroit is home to one of the largest Arab American communities in the United States. At SMDA we are honored to serve the legal needs of these individuals and of the diverse backgrounds throughout our community, including Chaldean-Americans.

Metro Detroit has the largest community of Chaldeans, over 120,000. Many of these Chaldeans reside in our very own neighborhood of Sterling Heights. Among our experienced team of attorneys, we have a Chaldean attorney, Dahlia Barkho. Dahlia brings a unique understanding of the Chaldean culture to our firm. She speaks English and Aramaic (Chaldean) and truly understands any challenges that Chaldean-Americans may deal with.

Our firm appreciates that Chaldeans have a very unique culture and come from a very large, yet close-knit community. We understand that they may find it easier and more comfortable meeting with an attorney who understands them first hand and speaks the Chaldean language. We are pleased to have a Chaldean-speaking attorney to help our Chaldean neighbors.

END_OF_DOCUMENT_TOKEN_TO_BE_REPLACED

When someone is involved in a car accident, they may have many questions. Most importantly, they are left wondering what the next step is. Our experienced attorneys are here to help.

After being involved in a collision, a car accident victim is left with many questions. What do I need to do next? Is my case worth anything? Who can help me? Rest assured that the attorneys at SMDA are available to answer all of your questions and guide you through your case.

END_OF_DOCUMENT_TOKEN_TO_BE_REPLACED

Our firm handles auto accident cases on a contingency fee. Having a contingency fee agreement means that the attorney fee is contingent upon the outcome of the case. In other words, you only pay us if we are able to recover a settlement or obtain a verdict on your case.

This type of fee agreement is beneficial to a client for many reasons. It permits a car accident victim to retain our attorneys, even if they do not have the funds to pay the attorney in the beginning. Offering a contingency fee agreement is very valuable to our clients. It allows them to retain an attorney who can fight for their rights, regardless of their financial status or ability to pay large attorney fees.

Additionally, you will not be required to pay any costs in the beginning of the case. All of the costs of the case will be paid up front by our firm, and the firm will be reimbursed upon resolution of the case.

END_OF_DOCUMENT_TOKEN_TO_BE_REPLACED

A minor, Alison Monaco, was involved in a serious 1-car accident and sustained serious and life-changing injuries. Our firm was contacted by her mother one day before a lawsuit had to be filed to against the insurance company, Home-Owners, for denying her daughter’s Michigan No-Fault Insurance Benefits.

Home-Owners insurance company denied the claim because at the time of the accident, the Alison was 15-years-old and driving without a parent in the car, contrary to Michigan law. Her mother had given a statement to Home-Owners that her daughter did not have permission to drive the car on the day of the accident. Her father allegedly made a comment at the scene that could be construed as meaning that his daughter did not have permission as well.

END_OF_DOCUMENT_TOKEN_TO_BE_REPLACED

SMDA Partner, Patrick Derkacz, just finished a trial this week for a client who was injured in a 2004 crash. We sued his insurance company for underinsured motorist (UM) coverage. This is coverage which you buy for yourself which should pay if you get in a car crash and the at-fault driver does not have enough coverage.

Our client suffered a serious injury to his ankle called a sub-talar dislocation. He soon developed post-traumatic arthritis. He walks with a limp and has ankle pain every single day. His doctors have offered ankle fusion surgery but cannot promise him that it will relieve his pain.

The Insurance company took the position that the money paid by the at-fault driver’s insurer (Allstate-after years of litigation) $100,000 was “adequate compensation.” We strongly disagreed.

Search
Our Other Blog
Recent Entries