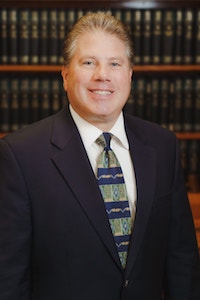 Phil was admitted to practice law in 1991 and he is now in his 28th year as an attorney. Phil is one of the founding partners of Serafini, Michalowski, Derkacz and Associates, P.C. and he focuses his practice in the areas of personal injury, automobile accident claims, no-fault claims also known as personal injury protection benefits, third party automobile negligence claims, slip and fall injuries, motorcycle injuries, trucking accidents and general civil litigation. Phil grew up in St. Clair Shores and Royal Oak and he has been fortunate to return to Macomb County to practice law.

Phil graduated from Royal Oak Dondero High School. He graduated magna cum laude while playing varsity tennis and golf in addition to earning honors in the classroom. Following graduation, Phil went on to study Criminal Justice at Wayne State University in Detroit, Michigan and Michigan State University in East Lansing, Michigan. Phil graduated from Michigan State magna cum laude with a bachelor’s degree in Criminal Justice while also working full time managing a shoe store across from campus. After graduation Phil was scheduled to serve his country as a member of the U.S. Army. However, after being involved in a serious car accident just before he was scheduled to leave for basic training, Phil was unable to follow that path. That accident and the events that followed changed the course of Phil’s life. A month after the accident he was issued a speeding ticket by the responding officer. Phil requested a formal hearting and defeated the prosecutor after successfully cross examining the police officer and obtaining a ruling that he was not an expert and could not offer opinion testimony. Following those events Phil set his sights on law school and chose to continue his studies at Wayne State University School of Law in 1988. Graduating from law school, Phil followed a path working for a Wayne County Circuit Court Judge for two years before moving on to the private practice of law.

Prior to establishing Serafini, Michalowski, Derkacz & Associates, P.C., Phil worked for a private law firm doing insurance defense for two years until he was injured in a motorcycle accident. This event set him on his current path as he decided to change fields and go into personal injury law representing the injured party following that accident and he has never looked back. After working with a personal injury firm for eight years, Phil left to work on his own. While working as a sole practitioner from 2003 through 2005, Phil met his future partner Jeff Michalowski. Ultimately, Phil decided to form Serafini, Michalowski, Derkacz and Associates, P.C., together with Jeffrey J. Michalowski in early 2006. Shortly thereafter, they were joined by Patrick J. Derkacz who had worked with Phil previously. The firm grew quickly to become a general practice firm offering expertise in specialized practice areas, including: no-fault and auto-law; longterm disability insurance claims and disputes; and, elder law—areas of practice that the firm is recognized locally and nationally. Today the firm enjoys being a neighborhood firm meeting almost all of its community’s legal needs.

From 1995 to present, Phil has maintained his focus on personal injury and auto law litigation while he, Jeff and Pat assist his clients in other aspects of law including longterm disability insurance claims and disputes; probate and estate planning; elder law; corporate planning; consulting and litigation. Phil has assisted thousands of local area families with the difficult task of navigating the legal system and obtaining the benefits they desperately need after they have been injured so that they can obtain the medical care they need to recover and, most importantly, to continue to be able to care for and provide for their family. Phil is passionate about helping his clients and their families to minimize the disruption in their lives following an accident.

Phil also remains actively involved in sports. He coached youth hockey for over ten years and he has coached youth baseball. He also enjoys playing golf and hockey. Phil and his family reside in Oakland County.

State Bar of Michigan
Member Since: 1991

Association of Trial Lawyers of America
Member Since: 2001

My clients are typically people who have been injured in a vehicular accident involving a car, truck or motorcycle, or injured by a dog bit or as a results of a slip & fall or other condition on a premises.

Hubbert v. ACIA 2013
$1,036,658.00 verdict for no-fault benefits due following a vehicle/truck collision that resulted in paralysis a year after the collision.

Mckenna v. Aetna 2015
Won a Federal Court of Appeals long term disability decision over turning a ruling in favor of Aetna and directing the trial court to enter judgment for plantiff.