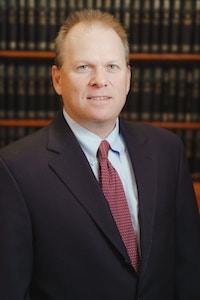 Patrick Derkacz grew up in Warren, Michigan where he attended public school. He graduated from Warren Mott High school in 1984 where he played football.

He then went to Eastern Michigan University where he graduated with a Bachelor’s Degree in Chemistry in 1988. After graduation he worked as an analytical chemist for the Parke-Davis Pharmaceutical Research Division in Ann Arbor, Michigan for several years.

Mr. Derkacz went back to law school at the Detroit College of Law (now Michigan State University Law School) in 1990. He graduated from DCL with Honors in 1993. While in Law School he participated in the Moot Court Program and was a member of the team that attended the Benjamin J. Cardozo competition in New York City. Mr. Derkacz was selected as the best Oralist in both the preliminary and final rounds. The team also was awarded first place for best brief and best team. He was also selected to be a teaching assistant for the contracts professor.

After graduating from DCL he worked briefly for several firms doing insurance defense work on premises liability and then professional liability cases.

He then accepted a position with a Plaintiff’s firm focusing exclusively on medical malpractice cases. Mr. Derkacz spent the next five years helping people who were injured as result of substandard medical care. During this time he honed his ability to review and understand the complexities of various medical conditions and the attendant physical restrictions and limitations they imposed upon his clients. During this time he assisted a number of his clients with the recovery of Long Term Disability Insurance Benefits.

In 2006 Mr. Derkacz joined with Partners Phil Serafini and Jeff Michalowski to form Serafini, Michalowksi, Derkacz and Associates while devoting his practice to Disability Insurance claims and cases. He has spent the last 12+ years helping people fight to get their Disability Insurance Benefits paid. During this time He has handled hundreds of disability claims against almost every disability insurance company including Cigna, Aetna, The Hartford, MetLife, UNUM, Lincoln Financial, Madison National and others.

We are usually retained after the client receives a letter advising that their claim for disability benefits has been denied. We represent the client in the administrative appeal process and will then file suit, usually in Federal Court, if the disability insurance company fails to overturn the claims denial decision. We have successfully resolved hundreds of Long Term Disability Insurance claims compelling payment by the insurance company for the client’s benefits.

Mr. Derkacz married the girl he took to senior prom after graduation from law school in 1993. They just recently celebrated their 25th wedding anniversary. They have four children and reside in Rochester Hills. Pat loves to play golf in the summer and watch his kids play on their school basketball, softball and baseball games. He also enjoys Michigan football games where his daughter is a section leader in the Michigan marching band. He also loves to travel and spend time up north with his wife and dog.

Michigan Association of Justice
Member Since: 2000