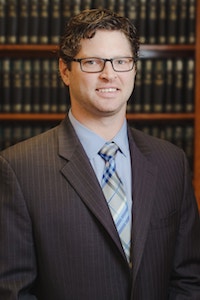 Ed was born and raised in Macomb County where he attended St. Clement High School in Center Line. After graduating from high school, he attended Northwood University where he obtained a bachelor’s degree in marketing and management. While at Northwood University, Ed was a four-year letter winner of the football team where he was voted as a team leader by his teammates in his final season. After graduating from Northwood University, he obtained his law degree from the Thomas M. Cooley Law School. He was admitted to practice law in Michigan in 2009. Ed is also licensed to practice in Eastern District of Michigan Federal Court, Western District of Michigan Federal Court and various tribal courts throughout the state.

Ed is dedicated to helping seriously injured accident victims hold insurance companies and negligent parties responsible and accountable for their actions. Each day, Ed enjoys going up against the insurance companies and their adjusters who are trained to minimize claims and pay as little as possible. He works diligently to present a case in a way which provides the best odds for his client to receive the compensation they deserve. Today, Ed uses his extensive knowledge of the local legal system to advocate for his personal injury clients as they seek to assert their legal right to retribution for the conduct of others.

Ed is a member of the State Bar of Michigan and the Michigan Association for Justice. Ed has been nominated as a top 40 under 40 personal injury attorney in Michigan. Ed has negotiated, settled and tried hundreds of cases, collecting millions of dollars on behalf of his clients, through the litigation process in both Michigan state courts and the local federal courts as well as through the arbitration process.

When he is not serving his clients, Ed enjoys spending time and traveling with his wife and daughter and is an avid college and professional sports fan rooting on the local teams.

Michigan Association for Justice
Member Since: 2017